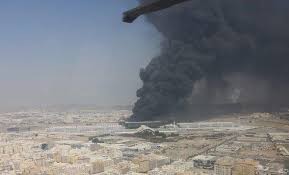 A massive fire broke out Sunday at the the Haramain high-speed rail station in Saudi Arabia's coastal city of Jeddah, and upon early reports the cause is as yet unknown.

Plumes of black smoke were still rising from the roof of the station at least four hours after the fire broke out at 12.35 p.m. (0935 GMT), Al-Ekhbariya state television footage showed.

It said civil defense were fighting the fire with air support and many sections of the blaze were under control.

At least five have been reported transported to a local hospital with injuries, with hundreds of emergency responders at the scene of the blaze.

Emergency fire suppression helicopters could be seen hovering over the train station's expansive roof in a situation which doesn't yet appear to be under control.