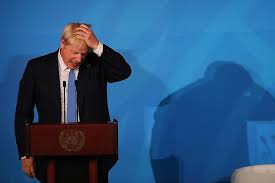 It started with the British Supreme Court overturning centuries of the balance of powers and ended with the Democrats in Congress announcing impeachment proceedings against President Trump.

When the decision came down from the Supreme Court I began my weekly article for Strategic Culture Foundation. In that piece I outline what the dynamics are and what the options were for both sides of the Brexit conundrum.

So, now with this ruling in place what's next and what's really going on tactically and strategically?

Johnson, for his part, refuses to resign. He can't or won't get anything past this hostile Parliament. This Parliament will reconvene to push more legislation to attempt to tie his hands against negotiating with the EU from any position of strength.

Remember what made this ruling necessary. Parliament doesn't want any meaningful Brexit and refused to accept Johnson's offer of a General Election to allow the people to form a new government to break the deadlock.

Why? Because they know that a new Parliament would be decidedly more Leave than Remain. The polls are perfectly clear on this. Neither Jo Swinson of the Liberal Democrats nor Jeremy Corbyn of Labour have a prayer in hell of becoming Prime Minister.

If they did, they would have accepted Johnson's offer. In fact, his offer was derided as a cheap political trick.