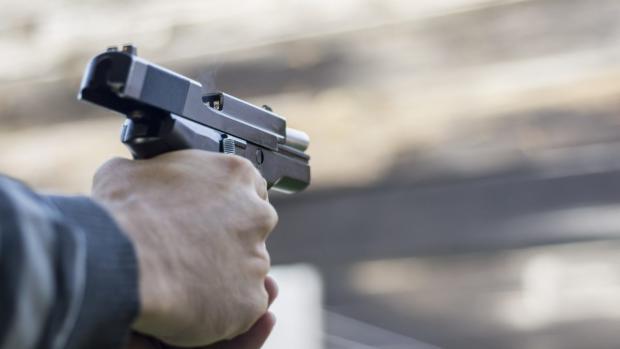 Increasingly theatrical and frightening active shooter drills are surprisingly common, even though school shootings are not.

Police officers outside of Dayton, Ohio, unsheathed their weapons and fired blanks in Franklin High School on Tuesday as part of a misguided effort to prepare students for a possible active shooter.

The planned drill unnecessarily ratcheted up the intensity of school lockdown procedures, which routinely require students and teachers to barricade themselves in their classrooms. That the exercise was potentially traumatizing was not lost on the officials who planned it, as they came equipped with "Social-Emotional Activities," as well as counselors who could talk with any disturbed teens.

"There was a concern and it did cause some stress" among parents and students, Lt. Gerry Massey tells the Cincinnati Enquirer. Senior Samantha Earnhart, one such terrified student, said that she "became very emotional" and "started to cry" upon hearing the gunfire.

And for what? Regardless of the feverish rhetoric around school shootings, the phenomenon remains exceedingly rare.

Less rare, however, are these increasingly extreme active shooter drills.

In August, police fired off blanks at a high school in Long Island, New York, in response to a pretend shooter who banged on classroom doors while students and teachers hid. Elementary school teachers in Indiana were recently shot execution-style with plastic pellets, causing many of them to bruise, and a Florida "Code Red" exercise last year was marketed to students as the real deal. "This is not a drill," a school administrator announced over the intercom, sending some students into an emotional frenzy as they texted their parents goodbye.

"I felt more traumatized than trained," Elizabeth Yanelli, a teacher in Cranberry Township, Pennsylvania, told Education Week after undergoing an active shooter drill at her school. Yanelli says teachers were told to shoot Airsoft guns in the cafeteria to sharpen their skills in case they might need to confront a gunman one day. Worse still, the teachers were told to practice on each other. "We had colleagues shooting colleagues, we had people getting hit with [plastic] pellets. … People were screaming, trying to run. People were tripping over each other. It was just horrendous."

Whether or not such exercises actually prepare people for active shooters remains to be seen, says James Alan Fox, the Lipman Family Professor of Criminology, Law, and Public Policy at Northeastern University. But they almost certainly stoke paranoia around an already-fraught issue.

"From 2013 to 2018, 40 students were fatally shot by an assailant in school, averaging 6.7 a year out of 55 million schoolchildren," Fox tells Reason. That includes the Parkland and Santa Fe shootings, which took 17 and 10 lives, respectively. He contrasts that with the student fatalities that occur while children commute to school—bicycle and bus crashes, for instance—which average about 30 a year.

35 missing Ohio children are recovered this month - with 20% rescued from human trafficking...

Dr. Pam Popper on Impeaching the Governor of Ohio and How Christians Are Being Influenced...