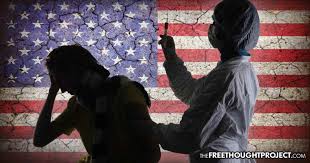 There is a (raspy) voice in America that is gaining bigger audiences, that is resonating with more and more Americans, that is calling Americans at all ends of the political spectrum to stand up against what is wrong in America.  It is a voice of integrity, a voice that seeks to protect defenseless children, a voice that calls for freedom of choice and free markets in healthcare, a voice that calls for America to rally against an American democracy that has morphed into fascism (industry control over government).  That raspy voice is that of Robert F. Kennedy Jr.  (I say raspy because Mr. Kennedy has spasmodic dysphonia, spasms in the muscles in his voice box that interrupt his speech).

WHERE TO PEG MR. KENNEDY

Mr. Kennedy is not going to fit into everybody's neat little political box.  His objective is to bring down Big Pharma.  While there are so many voices that decry what Big Pharma has done to America, Mr. Kennedy's is the only voice with a plan to do that.  Kennedy wants to file suit against the big-four vaccine makers, launch legal discovery, and then file fraud allegations against these pharmaceutical giants that would bring them to their knees.

But he is a Democrat.  And he is in the pro-global warming crowd.  That might not sit well with many Americans, especially conservatives.  Yet Mr. Kennedy assails his own Democrat party as being complicit in what he justifiably calls a crime – the fraud surrounding mass mandatory vaccination of American children.

MANDATORY VACCINATION STRIKES AT THE CORE OF OUR DEMOCRACY

The issue of mandatory vaccination that now circulates in the public narrative is far more than just a medical issue.  The push for mandatory vaccines is "galvanizing a resistance movement" that is addressing a far greater issue — that of whether America is a free-market democracy any longer.

Most Americans are confused over the issue of mandatory vaccination.  The scientific proposition is that we may have to sacrifice a few cases of vaccine-induced side reactions for the greater good of a population that is inoculated against what could be life-threatening disease.  Therefore, vaccine makers have legislative legal immunity against product liability.

The false presumption is the unvaccinated pose a threat to the public by spreading what could be life-threatening communicable diseases.  Those few eccentrics who oppose vaccination are allegedly threatening the health of others.  Anti-vaxxers are ridiculed and labeled fanatics.

WHAT DANGER CAN COME FROM BEING UNVACCINATED?

But if 95% of American children are vaccinated, what danger could the few unvaccinated children pose?  And if children develop antibodies naturally against infectious disease without vaccination, is that against the law?

The news media whose adverting base is largely comprised of Big Pharma companies, is complicit in this crime, failing to report that many of the reported infectious disease outbreaks emanate from use of newer synthetic vaccines that do not provide life-long immunity, and from hordes of unvaccinated illegal aliens who are crossing the border or travelers returning home from abroad.  Or worse yet, American children whose nutrient status is so poor due to processed food consumption that they have high-calorie malnutrition and can't adequately develop antibodies against infectious diseases after they are vaccinated.

The issue is not whether children get these infectious diseases or not since it is by infection that antibodies are produced that confer life-long immunity.  The issue is whether these infectious diseases induce so much hospitalization and death that vaccines are necessary.  The mortality and morbidity data used by pro-vaccine advocates either use dated studies before the era of clean (chlorinated) water, vitamin-fortified foods beginning in the 1940s and the Pure Food & Drug Act of 1906, or data from third-world countries where nutrition status is so poor that entire populations of children are vulnerable to death from infectious disease.

We don't need vaccines against cholera, typhoid or dysentery.  Disinfection via water chlorination, not vaccination, eradicated all three of them.

I have documented in an authoritative and peer-reviewed 81-page report entitled BEYOND VACCINES that if children around the globe were adequately nourished, particularly with the trace mineral zinc, their thymus glands would produce a subset of "naive" T-cells needed to produce antibodies.  Zinc deficiency is rampant in America and attributed to the rise in autism, autoimmunity, and more notably, ineffectiveness of vaccines themselves.  Dietary supplementation (zinc, selenium, vitamin C & D) is wise for all children who undergo vaccination if for nothing else than limiting side effects and increasing the effectiveness of vaccines.  The ineffectiveness of the flu vaccine among the very young and the very old can be explained by the inadequate intake of zinc in the diets of toddlers and the inability to absorb zinc in senior adults.

Did a Vaccine Experiment on U.S. Soldiers Cause the "Spanish Flu"?