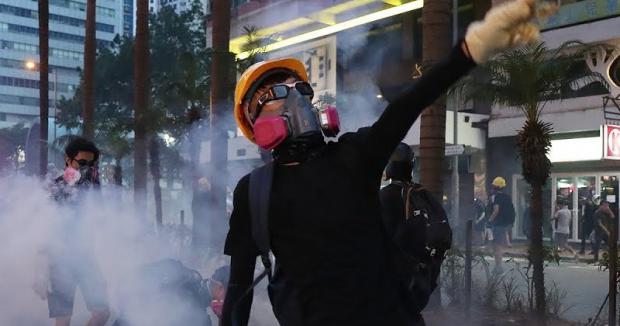 The Hong Kong government is considering an Internet ban as the latest tactic to stop protests and riots that have been ongoing since June.

As violence continues to escalate, a ban on face masks that was put into effect before the weekend failed to keep thousands of demonstrators off the streets who defied the new law.

Now authorities are refusing to rule out blocking the Internet in an effort to stop protesters organizing.

"Currently, the government is considering all possible legal options to halt the violence, which couldn't rule out an 'internet ban' in the future," Ip Kwok-him, a member of the Executive Council of the local government, said today.

Any such Internet ban would be particularly controversial because Chinese authorities routinely block the web in parts of their territory that are experiencing unrest.

Restricting Internet access would be viewed as more direct interference from Beijing and is likely to stir further anger.

Meanwhile, a protester in Hong Kong explained how the demonstrations have moved way beyond the issue of an extradition bill and are now about the existential survival of freedom in the region.

Wow. Listen to this Hong Kong protester talk about his desire for freedom. They are fighting for "survival" and trying to achieve what we have in America.

Perhaps the luxury of unprecedented freedom has made many in this country forget how fragile liberty truly is. pic.twitter.com/atZhGJDvNY

'Where is the Skynet logo?':

What's The Real Story Of Tesla In China?