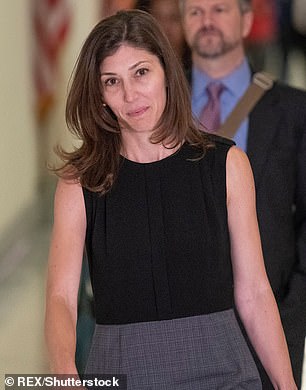 Lisa Page told Andrew McCabe that she and Strzok were not an item and had never been romantically involved.

Page was 'acutely embarrassed, mortified' that her affair was public but chose to lie rather than tell the truth, writes James B. Stewart in his new book Deep State: Trump, the FBI, and the Rule of Law, out today.

When their relationship did become public, so did the texts they exchanged mocking Trump and his supporters, with the two becoming a symbol of the so-called Deep State that was out to get the President.

When it came to the investigation into Hillary Clinton's use of a private email server, Comey considered asking for her to appoint a Special Counsel because he was so alarmed - but she rebuffed him.

And Deep State says that the new emails that were found on the computer of Anthony Weiner, the husband of Clinton's top aide Huma Abedin, by a lowly but determined FBI case officer.