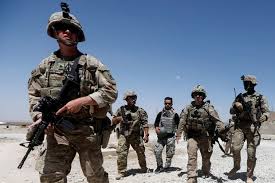 Lucas Tomlinson @LucasFoxNews - 17:50 UTC · Oct 11, 2019
Pentagon: Since May, U.S. forces have increased in Middle East by ~14,000: statement. There are currently more than 60,000 U.S. troops deployed to various countries and aboard warships.
---
Dan Lamothe @DanLamothe - 17:50 UTC · Oct 11, 2019
Pentagon just announced the deployment of two more fighter squadrons, one air expeditionary wing, two Patriot batteries and one THAAD unit to Saudi Arabia just now, moments before briefing with senior officials.
None of which is able to defend Saudi Arabia against another drone or cruise-missile attack.

The troop should be reminded that deployments in Saudi Arabia can end in unfriendly ways.