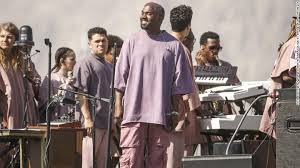 And the faculty and students were kind of here for it, kind of not.

West pulled up to Howard University around 8 a.m., pretty early for most college students. He still drew an appreciative crowd, judging from the videos the university posted.

But not everyone was impressed by the performance.

Greg Carr, an associate professor at Howard's Department of Afro-American Studies, asked his followers to send Kanye to the library after the performance.

"I have some books for him," he wrote, followed by the hashtag #TheMiseducationOfTheNegro.

Another professor at the school, Keneshia Grant, also tweeted her opinion about the performance.

"This Kayne [sic] church thing makes me uncomfortable. There, I said it," she wrote.