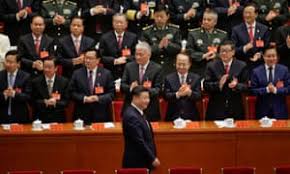 In his speeches, Xi often refers to "Qiang Zhong Gwo Meng" ("the Chinese dream"), a code phrase for the era of rejuvenation when China will eventually overtake the United States as the most powerful nation in the world.

Beijing apologists depict China as a non-predatory power, comparing it favorably to Europe's colonial countries in the past and to today's United States.

Similarly, the state-controlled Chinese media depict Chinese statecraft as being based on and reflecting ancient Confucian ethics: