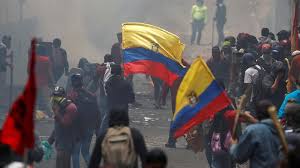 An indigenous group in Ecuador behind mass protests against cuts to fuel subsidies agreed to hold talks with President Lenin Moreno, who ordered a curfew in the capital on Saturday after the latest wave of violence in the city.

The announcement by the group, Conaie, was the first sign of a possible breakthrough in a dispute that has sparked national security concerns and cast doubt on Moreno's ability to carry out an austerity plan that is still in early stages.

But the group was angered by Moreno's decision to impose a military-enforced curfew in Quito and surrounding valleys shortly after it signalled its willingess to talk.

He also ordered the armed forces to restore order nationwide, blaming unrest on extremists he said had infiltrated protests.

Conaie, an umbrella organisation of indigenous groups across Ecuador, stopped short of calling off talks and said its members would continue to protest.

In a late-night speech to the nation, Moreno defended the curfew and thanked indigenous leaders for being open to dialogue and said together they would look at the impact of a law he passed last week that ended a decades-old fuel subsidy.