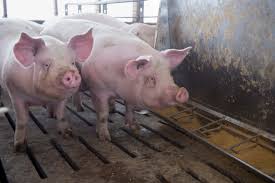 New figures published Monday from the Ministry of Agriculture of the People's Republic of China showed the pig-apocalypse continues to get worse. The country's herd in Sept. collapsed 41.1% YoY.

While government estimates are more conservative, the recent plunge in pig herds across the country could be around 50% to 55% by late 4Q19, Rabobank told Reuters.

"Next year, especially in the first half, production will go down further," Pan Chenjun, senior analyst at the bank, told Reuters last Friday.

The supply of the country's favorite meat has collapsed by 40% to 50% this year, depending on what statistics you read. This has already devastated rural communities and pushed up food prices to crisis levels.

"Something like 50% of sows are dead," Edgar Wayne Johnson, a veterinarian who has spent 14 years in China, told Reuters in June.

As the chart below shows, the Pork Index Guangdong Daily priced in dollars per kilogram has soared to record highs in Oct., adding pressure on Beijing to contain food-price inflation during the trade war with the US.