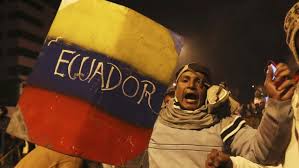 While Ecuadorians welcomed the calm and praised both sides for striking a deal, analysts said Moreno appeared to have been significantly weakened halfway through his four-year term by days of protests that forced him to reverse a policy he called necessary for the country's future.

"I think the government has suffered a serious blow," said Santiago Basabe, an analyst at the Latin American Institute of Social Sciences in Quito. "Its only economic reform proposal in the last two years has been reversed, and that reduces the little credibility and room for maneuver that it had."

Moreno severely miscalculated by reducing fuel subsidies without plans in place to cushion the blow for poor Ecuadorians, Basabe said.