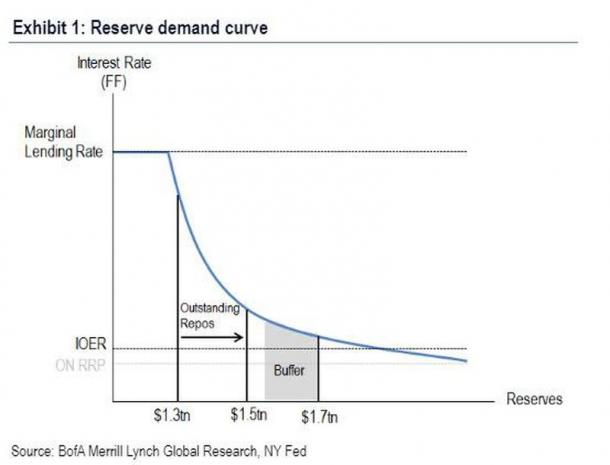 As has been widely discussed, and mocked, already, the Fed highlighted that these purchases were for reserve management only and have "no material implications for the stance of monetary policy", although how a restoration of financial conditions hit during the greater monetary policy experiment in history is not seen as, well, monetary policy is ludicrous.

"QE or Not QE" debate aside (here is Bloomberg opining on which is which), the Fed stated that by the time purchases conclude the level of reserves should be in line with early September levels. In addition, overnight and term repo operations will continue at least through January of next year and are specifically intended to manage funding pressures on a daily basis. As Bank of America noted overnight, this action represents a necessary step that serves "to fix the reserve hole the Fed dug itself into by continuing QT for too long", because apparently shrinking the balance sheet by $600BN after it was blown out by $4 trillion nearly crashed the banking system. This will also place the Fed back into an "abundant reserve regime", and represents a rapid shift away from repo operations to permanent balance sheet growth. Finally, it is also a confirmation that the Fed shares the prevailing view that funding pressures were driven by "reserve scarcity" vs "reserve distribution" issues (which were first suggested by the NY Fed's clueless president, John Williams).