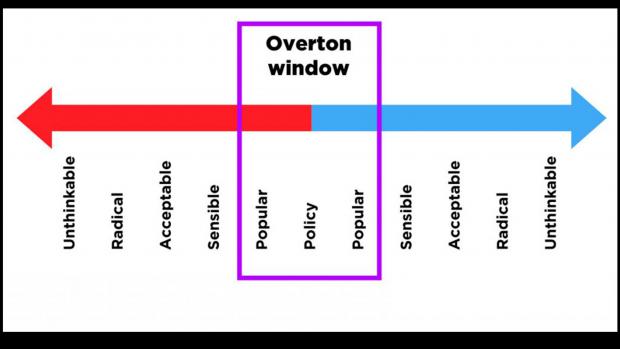 This article is about the political concept. For the 2010 novel, see The Overton Window. For the episode of Billions, see List of Billions episodes § Season 4 (2019). 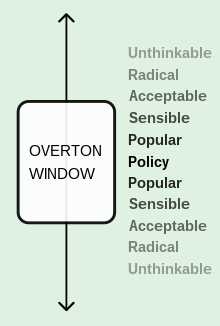 An illustration of the Overton Window, along with Treviño's degrees of acceptance

The Overton window is the range of ideas tolerated in public discourse, also known as the window of discourse. The term is named after Joseph P. Overton, who stated that an idea's political viability depends mainly on whether it falls within this range, rather than on politicians' individual preferences.[1][2] According to Overton, the window contains the range of policies that a politician can recommend without appearing too extreme to gain or keep public office in the current climate of public opinion.

Overton described a spectrum from "more free" to "less free" with regard to government intervention, oriented vertically on an axis, to avoid comparison with the left-right political spectrum.[3] As the spectrum moves or expands, an idea at a given location may become more or less politically acceptable. After Overton's death, his Mackinac Center for Public Policy colleague Joseph Lehman further developed the idea and named it after Overton.[4]

Political commentator Joshua Treviño has postulated that the degrees of acceptance of public ideas are roughly:[5][unreliable source?]

The Overton window is an approach to identifying which ideas define the domain of acceptability for a democracy's possible government policies. Politicians can only act within the acceptable range. Shifting the Overton Window involves proponents of policies outside the window persuading the public to move and/or expand it. Proponents of current policies, or similar ones, within the window seek to convince people that policies outside it should be deemed unacceptable. According to Lehman, who coined the term, "The most common misconception is that lawmakers themselves are in the business of shifting the Overton window. That is absolutely false. Lawmakers are actually in the business of detecting where the window is, and then moving to be in accordance with it."[6]

According to Lehman, the concept is just a description of how ideas work, not advocacy of extreme policy proposals. In an interview with the New York Times, he said, "It just explains how ideas come in and out of fashion, the same way that gravity explains why something falls to the earth. I can use gravity to drop an anvil on your head, but that would be wrong. I could also use gravity to throw you a life preserver; that would be good."[7] But since its introduction into political discourse, others have used the concept of shifting the window to promote ideas outside it, with the intention of making less fringe ideas acceptable by comparison.[8] The "door-in-the-face" technique of persuasion is similar.

The smart way to keep people passive and obedient is to strictly limit the spectrum of acceptable opinion, but allow very lively debate within that spectrum—even encourage the more critical and dissident views. That gives people the sense that there's free thinking going on, while all the time the presuppositions of the system are being reinforced by the limits put on the range of the debate.