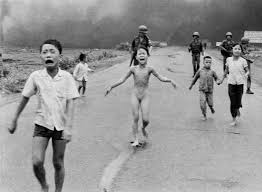 The striking image of a nine-year-old girl running naked from a napalm attack during the Vietnam war has been voted the most powerful news image of the last 50 years in a new survey.

The horrific 1972 photograph, taken by photographer Nick Ut of Kim Phuc, was published around the world and is credited for having helped end the conflict in Vietnam.

It was chosen by 37 per cent of British voters in a new survey as the hardest hitting news image of the last five decades.

Second on the list with 35 per cent was the heart-breaking and harrowing image of three-year-old Syrian Aylan Kurdi's lifeless body washed up on a beach in Turkey. Aylan's family had left Bodrum in Turkey on September 2, 2015, hoping to get to the Greek island of Kos but their small boat capsized just 30 minutes into their journey.

In joint third place were pictures of Nelson Mandela being freed from prison after 20 years in 1990, Buzz Aldrin on the Moon in 1969 and one protester confronting a Chinese tank on Tiananmen Square in 1989.

Other photos on the list included an injured woman being helped after the London 7/7 terror attacks, Prince Charles kissing Diana after their wedding and the moment US President Ronald Reagan was shot in 1981.