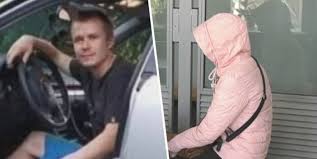 A husband has chopped off the penis of his wife's rapist after seeing her being attacked yards from their home in Ukraine.

The 27-year-old husband was on his way home when he saw the horrific episode in Shevchenkovo, a village in the eastern Kharkiv region.

His wife had left friends at a restaurant at around 1am and was heading to her home just 1,000ft away.

She was walking near her apartment block when a 25-year-old rapist, Dmitry Ivchenko, attacked her from behind.

Ivchenko covered her mouth with his hand to prevent her from screaming and dragged her into bushes, police said.

The victim's husband left the party ten minutes later. When he reached their apartment block, he heard noise coming from the bushes.

He came closer to find out what was going on and saw Ivchenko squeezing his wife's throat while raping her.

The husband then attacked the rapist by punching him on the head before grabbing his Swiss army knife and chopping Ivchenko's penis off.