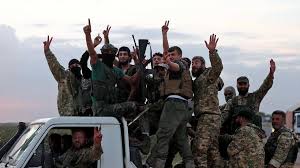 Turkey agreed to suspend military operations in northern Syria for five days in return for a U.S. pledge to facilitate a pullout by Syrian Kurdish fighters, a deal President Trump hailed as "an amazing outcome," but that some critics said mainly fulfilled Turkish goals.

Vice President Mike Pence reached the deal after five hours of talks with Turkish President Recep Tayyip Erdogan on Thursday aimed at stopping a nine-day Turkish military incursion into Kurdish-held areas in northern Syria. The U.S. and Kurds have been allies in fighting Islamic State, but Turkey considers Kurdish forces to be terrorists.

"Today the United States and Turkey have agreed to a cease-fire in Syria," Mr. Pence said, adding that Turkey would pause military operations for 120 hours while Kurdish forces withdraw from a "safe zone." Once that withdrawal is complete, the cease-fire will become permanent, he said.