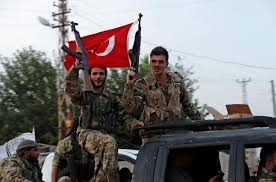 On Thursday, Vice President Mike Pence announced the US and Turkey had reached a ceasefire deal in northern Syria. The deal is intended to last 5 days (120 hours), giving the US time to evacuate Kurdish SDF forces from the area.

The Kurdish SDF issued a statement later in the day, saying that they are willing to abide by the ceasefire and leave all the areas in the safe zone, which US officials say Turkey will be in charge of.

This all seems like it's going to calm things down, for at least a few days, but it's not clear Turkey intends to totally stop its advance at the safe zone, and it's unlikely the SDF would cede any more territory.

Since Turkey's President Erdogan ruled out any ceasefire just the day before, Turkey was eager to downplay the deal as something short of a ceasefire, saying it couldn't be a real ceasefire because they don't consider the US a legitimate party in the fighting.

The other question in this deal is the Assad government, which is not a party to the deal, and faulted it as vague and confusing. The SDF had already given Assad's forces two cities, and Syria presumably intends to keep those, not let Turkey and its rebel allies overrun them.