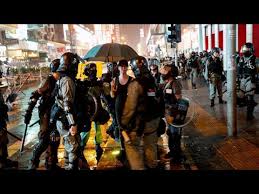 At least three threats were directed at student union representatives, it was disclosed at a Friday press conference. The culprits vowed to kill one victim's family members, while others were doxxed after posters displaying their private data were posted in public.

"If you do not understand this, I can look for [the names of her parents and sister] to have a chat," one Facebook user named Luck Lee said in a threat to student Leung Siu-yuk of Baptist University.

Leung Siu-yuk, external vice-president of Baptist University's student union, fought back tears when she talked about how she and her family had been targeted.

Leung said she had received a sinister message from a stranger on Facebook on Wednesday asking her to think twice before supporting further protests, after unions had offered legal and financial assistance to those requiring it. -SCMP