> Zeppelins could make a comeback with this solar-powered - Freedoms Phoenix 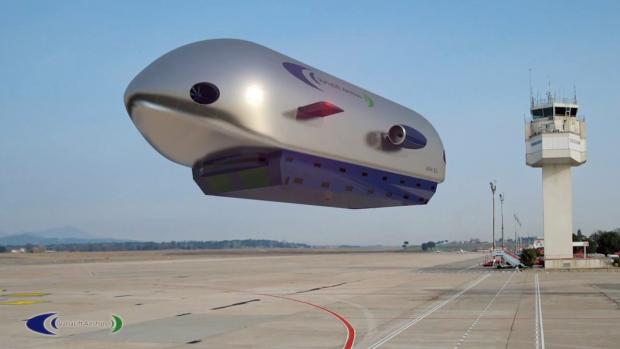 But they could be about to make a comeback in a big way — courtesy of a new aluminum-shelled, solar-powered airship that's being built by the U.K.-based company Varialift Airships.

According to the company's CEO Alan Handley, the airship will be capable of making a transatlantic flight from the United Kingdom to the United States, consuming just 8% of the fuel of a regular airplane. It will be powered by a pair of solar-powered engines and two conventional jet engines.

While its lack of onboard battery would limit travel to daylight hours, and its speed will only be approximately half that of a Boeing 747, the Varialift airship does promise to be a useful cargo carrier. Its creators claim that it will be able to carry loads ranging from 50 to 250 tons. Larger models with payloads up to 3,000 tons aren't out of the question either. Bulky cargo such as electricity pylons, wind turbine blades, and towers, or even prefabricated structures such as oil rigs could be carried underneath using cables. That means that cargo will have a weight limit, but no practical size limit.

Because it is an airship, which lifts off more like a balloon than an airplane, the Varialift airship could also be useful in this capacity since it doesn't require a dedicated runway. This could make it valuable as a delivery vehicle in places with poor infrastructure.

"Variable lift airships will ultimately secure a significant percentage (possibly the bulk) of the global air freight business, and a small, but still extremely valuable portion of existing road freight business, particularly for long distance, bulky or lightweight goods," the company claims on its website. "… The Varialift lands vertically and becomes heavier than air through compression of the lifting gas, [helium,] making it stable for loading and unloading."

Varialift hasn't yet begun construction on its production model. However, a prototype measuring 459 feet in length, 85 feet wide and 85 feet high is currently being built in France. New Scientist notes that it will be completed in the next nine months.