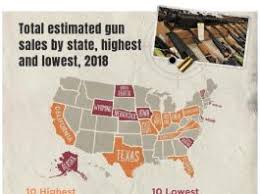 But, as Statista's Niall McCarthy notes, a new analysis entitled "Gun Country" from website security.org used information contained in the FBI's National Instant Criminal Background Check System and an industry-accepted formula to estimate the number of gun sales in a given year.

The research found that 972,860 guns were sold in Texas in 2018, making it the state with the highest total.

When it comes to sales per 1,000 inhabitants, however, things look different with Texas only coming 34th with 46.5 guns sold.

You will find more infographics at Statista

It's notable that some of the states with the highest population-adjusted rates of gun purchases (Montana, South Dakota and others) are among the states where guns are used the least in violent crimes.