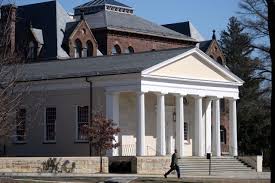 An official statement described the reparations as an act of "repentance" which is the "beginning of the process of repair that will be ongoing," according to Dean of Students John White.

Founded under the auspices of Princeton University, the theological school has long been a distinct institution of the Presbyterian church, though they've had reciprocal relationship.

It appears the first time an institution has agreed to a massive sum of millions for a merely 'indirect' role in slavery, given the seminary admits it "neither owned slaves, nor used slave labor to construct its campus, per a historical audit," as reported in Axios.

Instead, "it invested in Southern banks and its donors benefited from slavery" and further some of the founding faculty had used slave labor.

Rather than go to any specific individuals for families descended from slaves, the money will go toward a multi-year 'cross-cultural' changes action plan related to the seminary's Center for Black Church Studies, expanding campus awareness, as well as new faculty positions and 30 scholarships for students who are "descendants of slaves or from underrepresented groups".

Princeton Seminary President M. Craig Barnes described that "The Seminary's ties to slavery are a part of our story," and that "It is important to acknowledge that our founders were entangled with slavery and could not envision a fully integrated society."

Can Colleges and Employers Legally Require You to Get Vaccinated? It's Complicated.