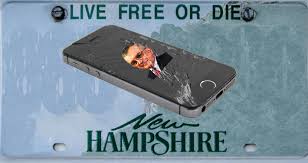 The New Hampshire State House rejected the Digital Fair Repair Act earlier this week in part thanks to a representative who seems to think that cell phones are literally garbage that no one should bother repairing.

The bill would have forced manufacturers such as Apple to share repair manuals and parts with independent repair stores. House members didn't kill the bill, but sent it back to committee for a year of interim study, citing security concerns and, in the words of Rep. John Potucek (R-Derry) the ubiquity, cheapness, and—in his opinion—disposability of new smart phones.

"In the near future, cellphones are throwaways," Potucek said, according to New Hampshire Business Review. "Everyone will just get a new one."

That is, of course, the problem that right to repair is trying to solve.

The new iPhone 11 costs between $699 and $1,349. And it can be hard to find one at the moment. Google's Pixel 4 costs between $799 and $999. Manufacturers seal smartphones to make it difficult to replace the battery and do basic repairs. Often, getting repairs through the company is so expensive that people simply purchase a new phone. Apple's repair monopoly is so dominant that it's the center of an investigation by the United States House of Representatives' Judiciary Committee.