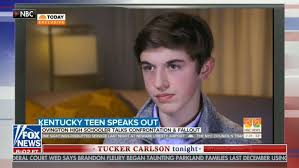 The new ruling, by District Judge William O. Bertelsman, is based on an amended complaint filed by Sandmann's legal team. The decision permitted Sandmann to obtain documents from The Post during an upcoming discovery process, as his lawyers have sought to argue that the paper negligently covered Sandmann's interactions with a Native American man, Nathan Phillips, while the student wore a red "Make America Great Again" hat and stood outside the Lincoln Memorial in January.

"The ruling bodes well for the NBC and CNN cases, as well," Todd V. McMurtry, one of the lawyers for the Sandmann family, tweeted, referring to other outstanding lawsuits concerning those outlets' coverage of the episode.

Sandmann was one of a group of Covington students from Park Hills, Ky., attending an anti-abortion March for Life in Washington, D.C. Phillips was attending the Indigenous Peoples' March on the same day.

Videos documenting Sandmann's encounter with Phillips went viral — including some clips that did not show the full incident. Incomplete video clips posted online prompted widespread accusations that Sandmann was a racist who had approached Phillips and mocked him; the Diocese of Covington and Covington Catholic High School quickly condemned Sandmann's behavior and vowed discipline.