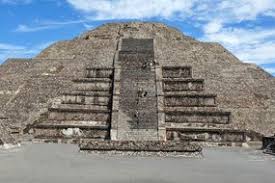 The ancient water tunnel is thought to have been built by Emperor Montezuma I in the 15th century. Inscriptions, carvings and paintings inside, as well as the tunnel itself, are thought to be linked to the Empire's god of water and fertility, Tlaloc.

Announcing the discovery, the Mexican Institute of Anthropology and History (INAH) revealed they had found the densely decorated tunnel in the city of Ecatepec de Morelos within the central state of Mexico.

Several carvings out of rock were found inside, as well as chunks of statue thought to have unbounded archaeological value.

According to local media, researchers found 11 carved images on the wall of the tunnel, which measured 27.5ft long, as well as the remains of a wooden gate.

The images inside the tunnel have been linked to Tlaloc, one of several gods the polytheistic Aztecs worshipped.

Tlaloc was associated as a beneficent giver of life and sustenance.

In a lawless stretch of Mexico, child soldiers as young as 6 are being drafted to fight crime