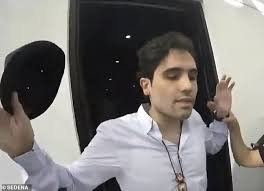 The Mexico government has released video of the moment Joaquín 'El Chapo' Guzmán's son was detained outside his home in Culiacán, placed on his knees and told to call his brother and stop a counterattack by armed cartel members on soldiers around the city.

Video of the failed arrest of drug lord Ovidio Guzmán López was revealed by Mexico's Defense Secretary Luis Cresencio Sandoval on Wednesday — an incident that has embarrassed the administration of President Andrés Manuel López Obrador.

In the footage, Guzmán is shown surrounded by soldiers with one telling him to call his brother, Iván Archivaldo Guzmán, the leader of 'Los Chapitos' wing of the Sinaloa Cartel, and tell him to stop the gun battle he launched in response to his brother's house being surrounded.

'Tell them to stop everything,' a soldier says as the sound of high-powered artillery rattles away in the background.

'Stop this, stop this. I already turned myself in,' Guzmán can be heard telling his brother on the phone.

Archivaldo responded 'no' and shouted threats against the soldiers and their families. The attacks continued and eight minutes later the first wounded soldiers were reported.

According to President López Obrador, the commander of the military unit responsible of leading the raid was offered $3 million pesos, or $157,00, to let Guzmán López walk free.

But when he declined their proposition, the cartel threatened to kill him and his family.