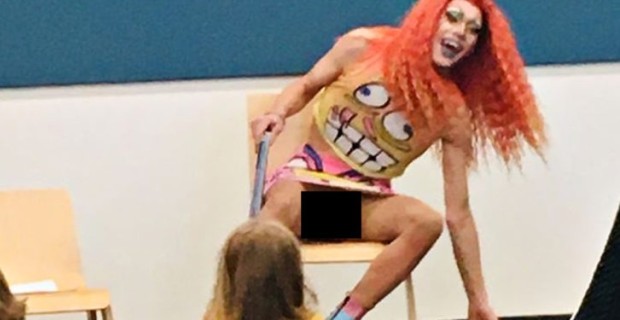 A drag queen accidentally flashed children a glimpse of his crotch during a 'Drag Queen Story Hour' event in Hennepin County, Minnesota.

The performer, known as Sasha Sosa, was reading to children at Hennepin County Library when the incident was caught on camera.

Child Protection League Action posted a series of images from the event asserting that they represented taxpayer funded "debauchery and sexual grooming."

According to the group, Sosa is aged 18 or 19 and regularly performs at strip clubs alongside 'Gemini Valentine', who was also present at the library wearing a revealing leotard.

The Hennepin County Library also reportedly failed to carry out a background check on the pair before the event.

The exposure of children to sexual themes at such events has caused fury amongst many conservatives.

Earlier this year we reported on photos showing young children lying on top of a drag queen during a 'Drag Queen Story Time' event in Portland.