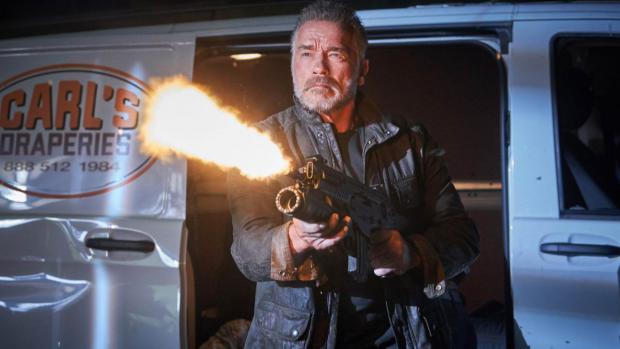 De Niro, Pesci and Pacino in Scorsese's most melancholy mob drama, and Schwarzenegger returns in the latest installment of a super-played-out franchise.

It used to be that the scariest things in Martin Scorsese's gangland dystopias were the bullet storms and the barroom stompings. Now there's a more formidable menace: time—a commodity out of which all of the characters are running, some of them suddenly.

The Irishman is Scorsese's most extensive examination of this subterranean culture. The movie is three and a half hours long, but it justifies most of that length with its sustained display of the director's still-dazzling gifts—his mastery of pace and camera movement, his intimate attention to actors, and the echoes he sets up with his previous films, either with familiar faces (Scorsese veterans Robert De Niro, Joe Pesci, and Harvey Keitel) or memory-prodding visual markers (a glowing nightclub visit, a funny prison food scene). At 76 years old, Scorsese is still operating at the peak of his powers, and still taking chances, too. He has opted to apply expensive digital de-aging technology to his lead actors, most of whom are also in their seventies (Keitel is 80). This could have gone distractingly wrong. But the intent wasn't to turn these men into teenagers; it was to send them back into their forties and fifties when the story required. And I think it works—after a few minutes I forgot about it.

Scorsese's narrative eyes and ears and attitude this time out are provided by Frank Sheeran (De Niro), a ruthless mob hitman whom we see first being taken under the wing of mafia bosses Russell Bufalino (Pesci) and Angelo Bruno (Keitel) and then later lured into the service of corrupt Teamsters chieftain Jimmy Hoffa (Al Pacino) with a single veiled phrase: "I heard you paint houses" (the title of the Charles Brandt book from which the movie is drawn). Frank does indeed paint houses—red, of course—and we see him practicing his lethal specialty in the long-unsolved 1972 execution of gangster Crazy Joe Gallo (Sebastian Maniscalco) at Umberto's Clam House in New York. (Sheeran claimed to be Gallo's sole executioner; other accounts disputed that.)

Sheeran's underworld exploits keep us anchored in time. We see him delivering a shipment of guns to a CIA depot in Florida in preparation for the 1961 Bay of Pigs invasion, which was intended to (but didn't) dislodge Fidel Castro from Cuba so the mob could move back in. (We also see a red-headed gun-runner at this camp who would seem to be David Ferrie—an eccentric character played by Pesci in Oliver Stone's JFK.) The movie takes the view that the Bay of Pigs fiasco led directly to the Kennedy assassination in 1963—an event applauded by Jimmy Hoffa, who had become a particular target of Kennedy's attorney general, his brother Bobby. "Bobby Kennedy is just another lawyer now," Hoffa crows after the president's murder.

Truman Show eat your heart out: