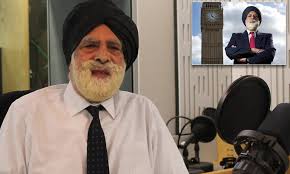 The Sikh peer, who has been a contributor on Radio Four's Thought For The Day programme for more than three decades, is also accusing Radio Four bosses of "prejudice and intolerance" and over-sensitivity in relation to its coverage of Islam, after he says he was "blocked" from discussing the forced conversion of Hindus to Islam, under the Mughal emperors in 17th century India.

The 87-year-old peer's resignation comes as a blow to the show's flagship segment, that has been a part of Radio Four's Today programme since 1970, and has been described by Britain's former chief rabbi, Lord Jonathan Sacks, as "one of the last remaining places in the public square where religious communities are given a voice in Britain."

The segment, originally aired on November 28, 2018 -- and in spite of Singh's script containing no criticism of Islam -- is the latest in a long line of suspect BBC decisions enforced by seemingly over-zealous producers. "It was like saying to a Christian that he or she should not talk about Easter for fear of giving offence to the Jews," Singh said. There were, however, no complaints about the segment reported to OFCOM, the government approved broadcasting watchdog.