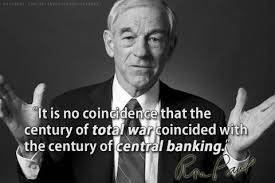 Limitations on the scope of war, built up over many centuries, had already begun to break down in the 19th century, but they were altogether obliterated in the 20th. And of course the sheer amount of resources that centralized states could bring to bear in war, and the terrible new technologies of killing that became available to them, made the 20th a century of almost unimaginable horror.

It isn't terribly often that people discuss the development of total war in tandem with the development of modern central banking, which — although antecedents existed long before — also came into its own in the 20th century. It's no surprise that Ron Paul, the man in public life who has done more than anyone to break through the limits of what is permissible to say in polite society about both these things, has also been so insistent that the twin phenomena of war and central banking are linked. "It is no coincidence," Dr. Paul said, "that the century of total war coincided with the century of central banking."

If every American taxpayer had to submit an extra five or ten thousand dollars to the IRS this April to pay for the war, I'm quite certain it would end very quickly. The problem is that government finances war by borrowing and printing money, rather than presenting a bill directly in the form of higher taxes. When the costs are obscured, the question of whether any war is worth it becomes distorted.