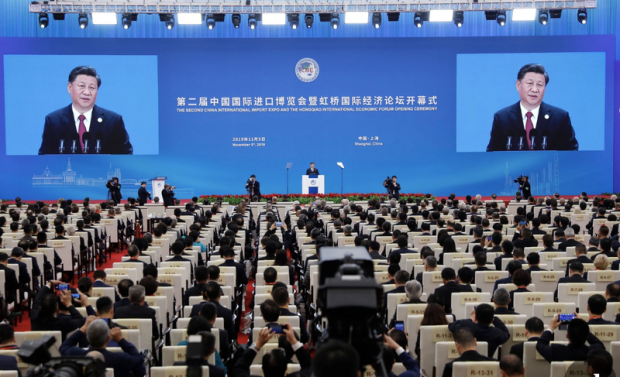 With many beginning to doubt the prospects for even a partial trade deal with Washington, Chinese President Xi Jinping arrived at China's second annual International Import Export Expo knowing that he needed to convince the world that Beijing intends to follow through on its promises to make its markets more accessible, even if that's an outright lie, and it has no intention of doing so.

So, in a speech on Tuesday, the Chinese president-for-life promised to welcome foreign investment to China, and insisted that Beijing remains committed to a program of market reforms, according to the New York Times and Bloomberg.

"Economic globalization is a historical trend," he said, comparing the momentum to the world's great rivers. "Although there are sometimes some waves going backward, and even though there are many shoals, the rivers are rushing forward and no one can stop them."

In other words, China will continue its long-running programs of economic reform and opening up, (even if a deal with the US never happens). In a sign of how trade war tensions have deflated over the past year, Xi refrained from taking a swipe at his US counterpart Donald Trump, like he did at last year's ceremony, since the two sides are still officially near completion of a partial trade deal.

"We must all put the common good of humanity first rather than place one's own interests above the common interests of all," Xi said.

In addition to enacting reforms like allowing foreign firms to operate independently in China, Xi has promised to lower tariffs and other costs.

"China will give greater importance to imports," Xi said Tuesday. "We will continue to lower tariffs and institutional transaction costs," he added, repeating an earlier pledge.

"Xi's speech endorsed the trade optimism as he indicated that he sees negotiations as the right way to solve disputes," said Gai Xinzhe, a senior analyst at Sino-Ocean Capital in Beijing. But Xi also warned against "intellectual blockages" and "widening technology gap," highlighting China's worry over the technology decoupling some U.S. politicians are advocating, he said.

Still, Beijing could be a long way from a deal. Reports published last night claimed Beijing is now asking for the removal of tariffs imposed in September, something that wasn't part of the Phase 1 deal as it was reported. The only way to get President Xi in a plane to meet Trump, at this point, would require the cancellation of at least some of the tariffs.

John Moses Browning: The Forgotten History and Legacy of the Father of Modern Firearms

No Likely Change in US Interventionist Agenda Ahead

Coverup of What May Have Caused Hank Aaron's Death