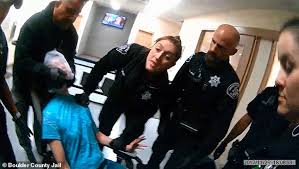 When she refused to sign the ticket, the officer took her to Boulder County Jail

When the deputies took Gotthelf out of her cell, they restrained her in a chair

The sheriff's office said they have 'factual disagreements with the allegations'