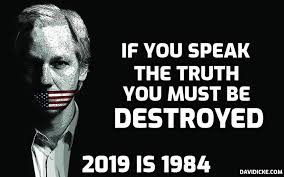 All of us are in danger.

In an age of prosecutions for thought crimes, pre-crime deterrence programs, and government agencies that operate like organized crime syndicates, there is a new kind of tyranny being imposed on those who dare to expose the crimes of the Deep State, whose reach has gone global.

The Deep State has embarked on a ruthless, take-no-prisoners, all-out assault on truth-tellers.

Activists, journalists and whistleblowers alike are being terrorized, traumatized, tortured and subjected to the fear-inducing, mind-altering, soul-destroying, smash-your-face-in tactics employed by the superpowers-that-be.

Assange, the founder of WikiLeaks—a website that published secret information, news leaks, and classified media from anonymous sources—was arrested on April 11, 2019, on charges of helping U.S. Army intelligence analyst Chelsea Manning access and leak more than 700,000 classified military documents that portray the U.S. government and its military as reckless, irresponsible and responsible for thousands of civilian deaths.