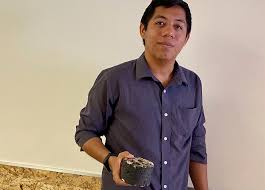 A Mexican college student has created a new formula for road pavement that repairs itself when exposed to rainwater.

Israel Antonio Briseño Carmona developed the groundbreaking formula by melting recycled tires into a putty combined with a number of other additives. The putty then harnesses rainwater as a catalyst for regeneration so that—instead of building roads that slowly crumbling away as they are exposed to inclement weather—the water spurs the road mixture to form calcium silicates that repairs itself.

Carmona, who is a student at Coahuila Autonomous University, says that he was inspired to develop the formula as a means of addressing Mexico's notoriously deteriorated roads.

"Damage is caused by rain filtering to the base of pavements, weakening it and creating subsidence," says Carmona. "This is how the idea [for] turning the greatest degradation agent into a recovery agent was born.

"At present, there are already pavements that regenerate—but none use water as a means of regeneration … much less made of tires," he added.

He now plans to get the formula approved for use in Mexico so he can begin brewing the asphalt through his own construction company.

The Truth Behind The Mask