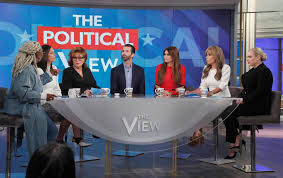 "The booing is fucking us up," The View co-host Whoopi Goldberg told the morning show's audience during a commercial break on Thursday. "It's messing with everyone's mic. You can grimace and all that. All we hear is booing."

Goldberg was trying to restore a sense of calm and civility after a rancorous first interview segment with Donald Trump Jr. and his girlfriend, former Fox News host Kimberly Guilfoyle. (The Hollywood Reporter attended the show as a member of the audience and took notes.)

The front rows were stocked with audience members who seemed to be mostly supportive of the first son, including a man wearing a Trump hat who asked, "Who killed [Jeffrey] Epstein?" during a commercial break at the end of the show.

During another commercial break, one woman in the audience tried taking Goldberg to task for a comment she made more than 10 years ago about director Roman Polanski, which Trump tried to repurpose as an attack on Goldberg.

"I don't know what you're talking about," the woman said to Goldberg. "Then be quiet and listen to me," the co-host responded. (The woman was also asked by a member of the show's staff to stop using her cellphone, another no-no for audience members.)