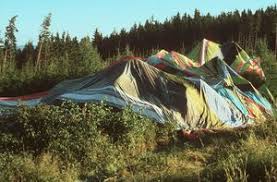 All it took was courage, science and 14,000 square feet of taffeta.It was a crisp Saturday in September 1979, and a breeze was blowing strong and steady from the north.

It was a crisp Saturday in September 1979, and a breeze was blowing strong and steady from the north.

That's what would help Günter Wetzel and his colleague Peter Strelzyk escape East Germany with their families in the middle of the night -- thanks to a hot air balloon they'd built from scratch using only a magazine article as a guide.

"The thought of leaving had been festering in my mind for years, but it was clear that it was very, very dangerous to go via a land route," said Wetzel, now 65 years old. "When I saw pictures of these balloons, I knew it was a possibility."

Wetzel talked to CNET through a German interpreter shortly after the 40th anniversary of his flight and ahead of the 30th anniversary of the fall of the Berlin Wall on Nov. 9. The flight was one of the most daring and ingenious escapes ever made from East Germany. There was no certainty of success, and failure would have meant imprisonment or even death. For Wetzel and many others, the desire for freedom outweighed the risks.

"If we hadn't been so optimistic, we probably couldn't have done it," he said.

Wetzel and Strelzyk have told different accounts of their escape, with each man claiming credit for the idea. They stopped talking shortly after arriving in the West and never reconciled before Strelzyk's death in March 2017. What follows is Wetzel's account of their flight to West Germany.

After World War II, Germany was divided between East and West. The West, with the help of the US and Britain, flourished and modernized. The East, under the influence of the Soviet Union, struggled. About 3.6 million East Germans, 20% of the population, fled between 1945 and 1961.

East Germany, known as the German Democratic Republic (GDR) or Deutsche Demokratische Republik (DDR), didn't want the rest of its citizens to leave for the richer West, so in August 1961 it built barriers to keep its people in. The official GDR line: It wanted to keep "decadent, immoral westerners out."

Things Are Hard Right Now, But You're Going to Be Okay

Too Blessed To Be Stressed!!!

Kindness in West Virginia: Police Give Traffic Violators Gift Cards Instead of Tickets