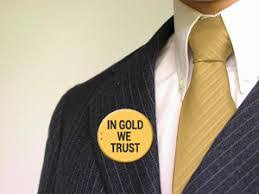 Ultimately gold is just a shiny stone. The dollar is just paper.

All markets depend on psychology.

In a crisis, it's hard to predict what gold will do,

it will fall as people sell

The price of gold is a measure of the psychological state of society.

It moves up whenever there is a whiff of trade war, financial or political instability or any other war. It usually goes in the opposite direction of the market as a whole.

It spiked in August when Trump and China engaged in a tariff tit-for-tat. It has faded recently on "trade optimism." Lately, it has been fixated on this deal. In fact, there is no trade deal but the market has not realized that.

The gold market is like a baby in a crib. Just jingle some keys and its mood changes immediately. Of course, the Illuminati business media decides what baby will see. They have been juicing the stock market to record highs on trade "optimism."