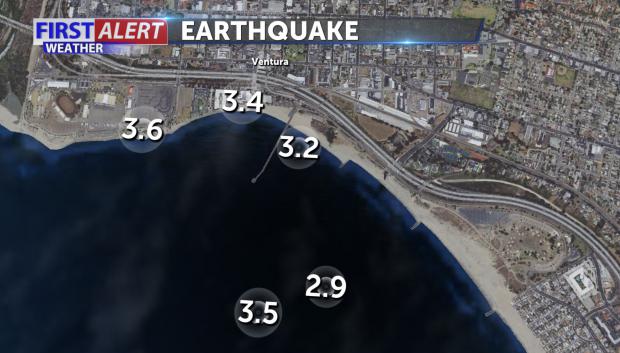 A swarm of small earthquakes has struck near the California-Mexico border underneath the town of El Centro in Imperial County.

Scientists are closely watching the cluster, which began at 6:07 p.m. Monday with a magnitude 2.8 quake, followed six minutes later by the largest quake so far, a magnitude 4. There were 18 aftershocks within the first two hours, Caltech seismologist Egill Hauksson said.

No damage was reported in El Centro, which has a population of about 44,000. El Centro is the seat of Imperial County, one of the nation's most important agricultural regions. The region has been hit hard in past quakes, most recently during the magnitude 7.2 earthquake that struck south of the California-Mexico border on Easter Sunday in 2010, killing two people in Mexicali and damaging buildings on both sides of the border.

This part of California, about 180 miles southeast of downtown Los Angeles, is routinely a source of interest among seismologists when earthquakes happen there. The region was particularly active with earthquakes in the late 1970s and 1980s.

"Swarms in this region are often prolific and can last for weeks," Hauksson said. "There's no lack of faults there."

Swarms of small quakes are not unusual for this area, Hauksson said. "These have happened numerous times before without being followed by a major earthquake," he said.