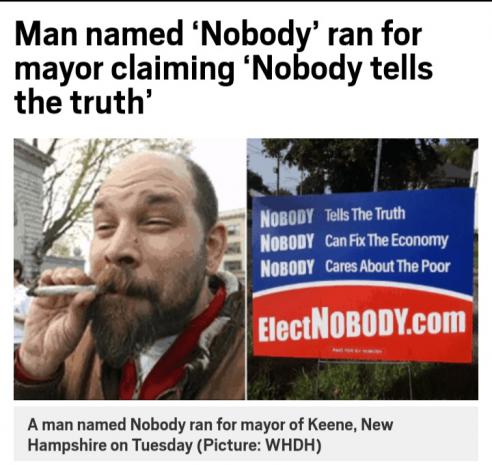 Signs urging voters to support him were posted around town that read 'Nobody tells the truth, Nobody can fix the economy,' and 'Nobody cares about the poor.'

He told WHDH: 'I made it (the name change) because I intended to run for office and there's a lot of jobs in government that Nobody should do.' Sorry, this video isn't available any more.

Nobody said, if elected, he said he would have fought to legalize marijuana, explaining that his wife died of cancer without the opportunity to use medical marijuana to ease her suffering.

He is also vowed to be fiscally conservative and hoped to lower taxes. thumbnail for post ID 11085616Boy, 14, who killed dad, kissed pet bunny then drove to school and killed boy, 6, faces li

According to the Boston Globe, Nobody has been convicted of criminal charges nearly a dozen times. He has spent at least 60 days in jail for 11 charges related to disorderly conduct and narcotics. On Tuesday's elections, only 11 percent of the town voted, but they voted against Nobody. Instead, they nominated his opponents, Mitchell Greenwald and George Hansel, who will face off in November's general election – but Nobody said he had a backup plan if he was not elected.

It's Time to Revisit "The Truman Show"