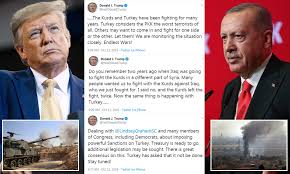 TRUMP: "Turkey is a great NATO ally and a strategic partner of the US. Economic relations continue to grow. We had a frank and productive conversation. We discussed the situation in Syria."

ERDOGAN: "We can surmount the S-400 issue through dialogue... we could acquire US Patriot missiles as well."

ERDOGAN: "Turkey destroyed the plans of the PKK in Syria. Turkey and the US can move together to completely clean ISIS from Syria. The most suitable partner for this is Turkey. We fought against ISIS in Syria and lost soldiers on this path."

ERDOGAN: We're "especially sensitive" about minorities such as Christians and Yezidis along the Turkish-Syrian border. "The Christian minorities... the one's living on our side of the border have no problems whatsoever. The one's on the other side will be helped by a special program."

ERDOGAN: "[Fethullah Gülen] Should not be welcomed by the United States... this individual is a terrorist."

TRUMP: "I think the president [Erdogan] has a great relationship with the Kurds. Many live in Turkey and they are happy and taken care of..."