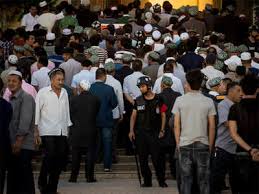 The East Turkistan National Awakening Movement, a Washington-based group that seeks independence for the mostly Muslim region known to China as Xinjiang, gave the geographic coordinates of 182 suspected "concentration camps" where Uighurs are allegedly pressured to renounce their culture.

Researching imagery from Google Earth, the group said it also spotted 209 suspected prisons and 74 suspected labor camps for which it would share details later.

"In large part these have not been previously identified, so we could be talking about far greater numbers" of people detained, said Kyle Olbert, the director of operations for the movement.

"If anything, we are concerned that there may be more facilities that we have not been able to identify," he told a news conference in suburban Washington.

Anders Corr, an analyst who formerly worked in US intelligence and who advised the group, said that around 40 percent of the sites had not been previously reported.

BREAKING: Coronavirus a stealth strain that can be carried by people who show NO fever or ...

China built a lab to study SARS and Ebola in Wuhan - and US biosafety experts warned...

20 Million People QUARANTINED in China for Wuhan Coronavirus: What to Do RIGHT NOW

China built a lab to study SARS and Ebola in Wuhan...

Futures Hit Record High On Optimism That "Corona Is Contained"