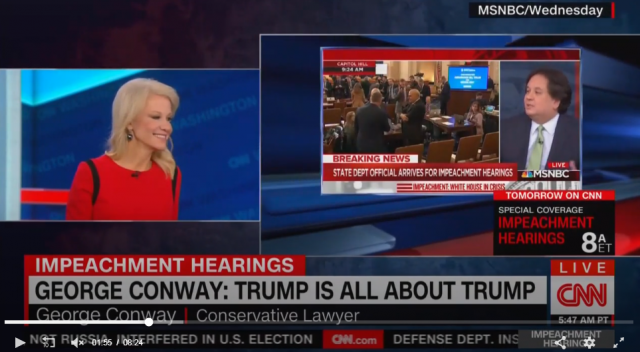 This particular time around, however, took an even more heated turn than usual when CNN anchor Wolf Blitzer directly asked about her husband, outspoken Trump critic George Conway.

Blitzer wanted to ask the Trump aide one last question Thursday morning about her husband, who spent the entire day at MSNBC providing on-air analysis and criticizing the GOP's "incoherent" defense of the president.

Before he could get to the question, Conway immediately pounced on Blitzer's suggestion about her marriage.

"Did you just say there are issues there?" she exclaimed. "You don't want to talk about—why would you say that?!"

Blitzer eventually pointed out that while he personally didn't want to talk about their marriage, he wanted to get Conway's reaction to her husband's criticism. Conway, meanwhile, continued to push back at the very notion that Blitzer was questioning her about her husband.