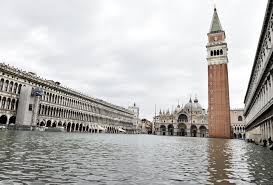 Mayor Luigi Brugnaro closed access to the submerged St. Mark's Square and issued an international appeal for funds, warning that the damage caused by this week's floods could rise to one billion euros.

Local authorities said the high tide peaked at 154 cm (5.05 ft), slightly below expectations and significantly lower than the 187 cm level reached on Tuesday, which was the second highest tide ever recorded in Venice.

But it was still enough to leave 70% of the city under water, fraying the nerves of locals who faced yet another large-scale clean-up operation.

"We have been in this emergency for days and we just can't put up with it any more," said Venetian resident Nava Naccara.

The government declared a state of emergency for Venice on Thursday, allocating 20 million euros ($22 million) to address the immediate damage, but Brugnaro predicted the costs would be vastly higher and launched a fund to help pay for repairs.

"Venice was destroyed the other day. We are talking about damage totaling a billion euros," he said in a video.