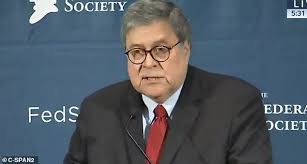 Attorney General William Barr accused Democrats of 'waging a scorched-earth, no-holds-barred war of resistance' against President Trump designed to 'sabotage the functioning of the executive branch.'

The nation's top prosecutor made the remarks in a speech to conservative lawyers who gathered in Washington, DC, on Friday for a conference.

'In waging a scorched-earth, no-holds-barred war of resistance against this administration, it is the left that is engaged in a systematic shredding of norms and undermining the rule of law,' Barr told guests of the Federalist Society convention in the capital.

Barr, who was named Attorney General by Trump after the resignation of Jeff Sessions last year, accused the 'resistance' of 'dangerous' and 'incendiary' language by questioning the legitimacy of the sitting government.

'This is a very dangerous and indeed incendiary notion to import into the politics of a democratic republic,' Barr said.