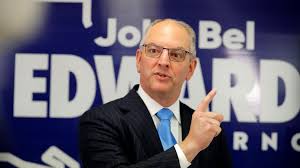 General election for Governor of Louisiana

The outcome will provide the latest barometer on the value of Trump's endorsement for Republican candidates ahead the 2020 elections.

In a Tweet early on Saturday morning, Trump urged Louisiana voters to vote for Rispone, saying he will decrease their taxes and the cost of auto insurance, which is the highest in the United States, while protecting their gun rights.

"He will be a great governor!" Trump wrote in an earlier Tweet.