> Iraq: All Is in Ruins and Mourning - Freedoms Phoenix 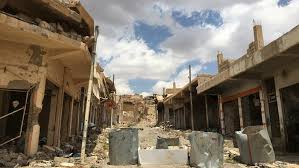 The British were always masters of efficient imperialism.  In the 19th century, they managed to rule a quarter of the Earth's surface with only a relatively small army supported by a great fleet.

Many of their imperial subjects were so overawed by the pomp and circumstance of British rule that they often willingly cooperated, or at least bent the knee.

Call it colonialism 101.  Ardent students of Roman history, the British early on adopted the Roman strategy of 'divide et impera', divide and conquer.  The application of this strategy allowed the British Empire to rule over vast numbers of people with minimal force.

In my last book, `American Raj,' I sought to show how the American Empire was using techniques of the British Imperial Raj (raj = rule in Hindi) employed in India to control the Mideast.  Now, we are seeing the same strategy in forgotten Iraq.