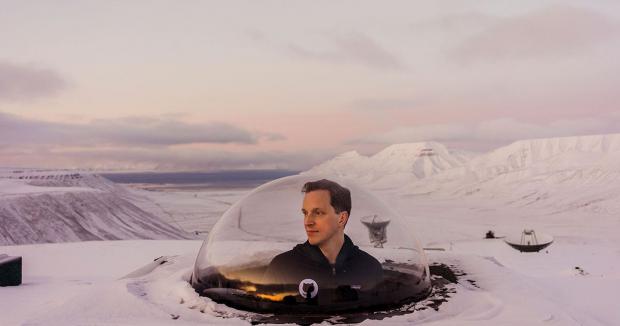 The last stop for civilization before the North Pole is Svalbard, an archipelago north of mainland Norway along the 80th parallel. Most of Svalbard's old Norwegian and Russian coal mines have shut down, so locals have rebranded their vast acres of permafrost as an attraction to scientists, doomsday preppers, and scientist doomsday preppers. Around Svalbard, things can be hidden from the stresses of the outside world. There's a treaty in place to keep it neutral in times of war. In other words, it's an ideal spot for a big global reset button or two.

Pride of place belongs to the Svalbard Global Seed Vault, where seeds for a wide range of plants, including the crops most valuable to humans, are preserved in case of some famine-inducing pandemic or nuclear apocalypse. The seed vault looks like something out of a movie, its entrance a triangular obelisk jutting high out of a blinding white expanse. It sparkles with glowing green lights.

Nat Friedman, however, hasn't come for the beat-the-apocalypse aesthetics. On Oct. 24, the tall, thin, 42-year-old chief executive officer of GitHub Inc., Microsoft's world-leading code bank, hops in a van and drives about 15 minutes from his hotel to an abandoned coal mine, where he puts on a miner's helmet and headlamp. Deep inside one of the mine's frigid, eerily quiet arteries, Friedman comes to what looks like a metal tool shed. "It's more mine-y and rustic and raw-hole-in-the-rock than I thought it would be," he says.

This is the Arctic World Archive, the seed vault's much less sexy cousin. Friedman unlocks the container door with a simple door key and, inside, deposits much of the world's open source software code. Servers and flash drives aren't durable enough for this purpose, so the data is encoded on what look like old-school movie reels, each weighing a few pounds and stored in a white plastic container about the size of a pizza box. It's basically microfilm. With the help of a magnifying glass, you—or, say, a band of End Times survivors—can see the data, be it pictures, text, or lines of code. A Norwegian company called Piql AS makes the specialized rolls of super-durable film, coated with iron oxide powder for added Armageddon-resistance. Piql says the material should hold up for 750 years in normal conditions, and perhaps 2,000 years in a cold, dry, low-oxygen cave.