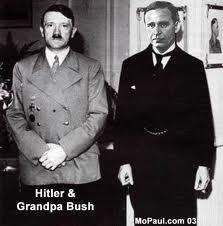 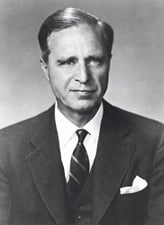 Of relevance to an understanding of America's insidious role in supporting Nazi Germany.This article was first published on GR in March 2016.

"A  famous American family" made its fortune from the Nazis, according to John Loftus' documented historical analysis.

The Bush family links to Nazi Germany's war economy were first brought to light at the Nuremberg trials in the testimony of Nazi Germany's steel magnate Fritz Thyssen. Thyssen was a partner of George W. Bush's grandfather Prescott Bush:

From 1945 until 1949 in Nuremberg, one of the lengthiest and, it now appears, most futile interrogations of a Nazi war crimes suspect began in the American Zone of Occupied Germany.

… What the Allied investigators never understood was that they were not asking Thyssen the right question. Thyssen did not need any foreign bank accounts because his family secretly owned an entire chain of banks.

He did not have to transfer his Nazi assets at the end of World War II, all he had to do was transfer the ownership documents – stocks, bonds, deeds and trusts–from his bank in Berlin through his bank in Holland to his American friends in New York City: Prescott Bush and Herbert Walker [father in law of Prescott Bush]. Thyssen's partners in crime were the father and [grandfather] of a future President of the United States [George Herbert Walker Bush]. (John Loftus, How the Bush family made its fortune from the Nazis: The Dutch Connection, Global Research, February 2002, edit by GR)

The American public is not aware of the links of the Bush family to Nazi Germany because the historical record has been carefully withheld by the mainstream media.

In September 2004, however, The Guardian revealed that:

George Bush's grandfather, the late US senator Prescott Bush, was a director and shareholder of companies that profited from their involvement with the financial backers of Nazi Germany.

The Guardian has obtained confirmation from newly discovered files in the US National Archives that a firm of which Prescott Bush was a director was involved with the financial architects of Nazism.

His business dealings, which continued until his company's assets were seized in 1942 under the Trading with the Enemy Act, has led more than 60 years later to a civil action for damages being brought in Germany against the Bush family by two former slave labourers at Auschwitz and to a hum of pre-election controversy.

The evidence has also prompted one former US Nazi war crimes prosecutor to argue that the late senator's action should have been grounds for prosecution for giving aid and comfort to the enemy. ( Ben Aris and Duncan Campbell, How the Bush's Grandfather Helped Hitlers Rise to Power,   Guardian, September 25, 2004)

The more fundamental question is not whether Prescott Bush helped Adolph Hitler (image below). From a historical perspective, what is important is how the rise to power of Adolph Hitler was supportive of  US business interests in Germany.