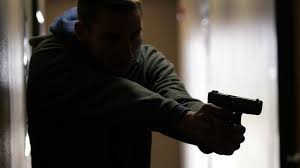 This case was touched on briefly in a previous post discussing legal arguments made by law enforcement officers that attempt to portray people in their own homes as dangerous aggressors when police crash through their doors unannounced.

In this case, South Carolina police officer David Belue's legal rep tried to tell the court Betton's response to a bunch of heavily-armed men rushing through his door -- grabbing a gun and moving into the hallway from the bathroom -- created a situation where Betton deserved every bullet fired at him by officers. In other words, if Betton didn't want to get shot, he shouldn't have been in his own house when it was invaded by officers who never informed him they were police officers.

Here's a recap of the events leading to the lawsuit, from the Fourth Circuit's decision [PDF]:

In the afternoon of April 16, 2015, a team of plain-clothed law enforcement officers armed with "assault style rifles" used a battering ram to enter Julian Ray Betton's dwelling to execute a warrant authorizing a search for marijuana and other illegal substances. The officers did not identify themselves as "police" or otherwise announce their presence before employing the battering ram. From the rear of his home, Betton heard a commotion but did not hear any verbal commands. Responding to the tumult, Betton pulled a gun from his waistband and held it down at his hip.

This shooting was immediately followed by a bunch of lies. Officer Belue first claimed Betton fired his gun at officers. The ensuing investigation showed Betton's weapon was never fired. Faced with this direct contradiction of his statement, Officer Belue revised his, claiming Betton pointed his gun at officers. According to Betton, he never got the chance to point a gun at anyone. The moment he appeared with his gun, officers opened fire.

Officers also lied about their entrance to Betton's home. They claimed they knocked and announced their presence. Betton's surveillance camera told the real story. Nine seconds elapsed between the officers' arrival on Betton's lawn and their entrance into his house. None of the officers present appeared to announce anything before bashing down his door and swarming inside.