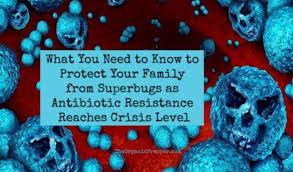 Antibiotics have saved lives since 1942 when the first person was saved using the first antibiotic, penicillin. However, since then, overuse and permeation of life-saving drugs into our environment and water sources has caused drug resistance in once easy-to-cure strains of bacteria and fungi.

As preppers, we prepare for disasters, but most don't know that we are no longer waiting for a particularly serious disaster. The apocalypse has already arrived.

Superbugs are here and they are a serious threat.

The CDC recently published a troubling report about antibiotic resistance called Antibiotic Resistance Threats in the United States. Here are two excerpts that get right to the point:

Untreatable or pan-resistant infections are no longer a future threat—they are a reality. Around the world, including in the United States, people are dying from infections for which effective antibiotics are not available. In fact, many experts, including at CDC, believe we are already in a 'post-antibiotic' era. (CDC, pg. 34)

Human waste (poop) can carry traces of previously consumed antibiotics and antibiotic-resistant germs. Waste goes to treatment plants and is released as treated wastewater. This can contribute to antibiotic resistance in the environment, including contaminating lakes and streams." (pg. 26)

We are not preparing for the post-antibiotic era, we are experiencing it right now.

"This is not some mystical apocalypse or fear-mongering. It is reality," Dr. Victoria Fraser from the Washington University School of Medicine in St. Louis told NBC News. "We are faced with trying to take care of patients who have drug-resistant infections that we have no treatment for." (source)

How did this happen?

What causes drug resistance in fungi and bacterial infections? The CDC released a harrowing diagram in its 2019 report showing the process. It puts the information in almost "cute" picture form on page 18 in the section titled How Antibiotic Resistance Happens: Antibiotic Exposure and the Spread of Germs. This one diagram paints the literal picture of the dissolution of the foundation of modern medicine: antibiotics.

Increases in antibiotic resistance are driven by a combination of germs exposed to antibiotics, and the spread of those germs and their mechanisms of resistance. This naturally occurring process is accelerated when antibiotics are constantly present in the environment or in the germs' hosts (e.g., patients). (CDC, pg. 18)

What this means is that bacteria and fungi are learning how to survive in this world that is drenched in the poison that was once deadly to them: antibiotics. And the most terrifying thing is that germs are able to share this information with other deadly microorganisms that live in their world of disease. Once they are able to evolve to either resist or expel the drug from their little "bodies," antibiotic resistance has taken hold.